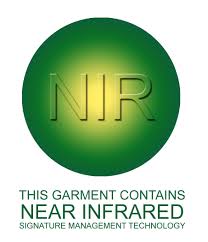 During a military battle, one of the best defense tactics is to see your enemy, but avoid being seen by your enemy. NIR-Compliant uniforms help soldiers, marines, and airmen do just that.

These uniforms and military gear utilizes a unique cloth that allows members of the military to “appear at the same radiation level” as the surrounding atmosphere which consequently helps them to go undetected by their opposition. Carter Industries Inc. is proud to say that our 27/p Nomex Flight Suits are NIR-Compliant.

NIR which stands for Near-Infrared, is an invisible level of radiation that cannot be detected by the average human eye. Because of this, devices called NIR Image Converters were introduced in order to be able to detect infrared radiation which allowed individuals to detect soldiers, marines, and other members of the military.

Before the Image Converters were created there were devices that were able to sense temperature which made it easy for members of the military to be detected, since of course, the temperature of a human body can be easily distinguished from any terrain. Because of this, NIR-Compliant gear, is now becoming a standard for military clothing and equipment. It allows military members to go unnoticed by their opposition by blending the radiation of the individual with the battle atmosphere.

Perhaps the easiest way to explain the NIR-Compliant technology, is to compare to camouflage clothing and gear. Camouflage was invented so that members of the military, hunters, etc. would be able to blend in with the background and go undetected by opposing parties and animals in the case of hunting.

In addition to preventing detection by NIR Image Converters, NIR-Compliant clothing and gear are also made to be “less visible in low-light environments by reducing the reflection of light”.

Not only are Carter flight suits NIR-Compliant, but they also contain a host of other features. These features include, but are not limited to, flame-resistance, breathable fabric, 2-way zippers, various functional pockets, and a glove-like fit. Our signature CWU 27/P Nomex Flight Suits are manufactured in the USA under the compliance of the Berry Amendment and we remain the only manufacturer that can provide you with a certificate of compliance, guaranteeing that our suits meet the military standard MIL-C-83141ª.

For more information on our flight suit, or to purchase yours today, click here.

Why Choose Nomex Over Other Materials