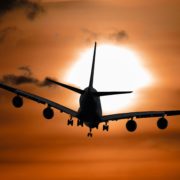 The Future of Flight

Man has always been fascinated with flight, with mythical tales dating back to ancient times, such as Icarus. In China at around 400 BC, the discovery was made that kites could fly in the air and since then, humans have been obsessed with the idea of flying themselves.

The history of aviation is one littered with important landmarks and continues to evolve at a rapid pace. Here’s a look back at the journey to take to the air and where aviation is likely to be heading in the future.

The History of Aviation

Before thinking about where flight is heading it’s first, necessary to take a look at where it’s been. For centuries, the focus was solely on trying to create bird-wings for humans but the differences in the musculature and bone density prevented take-off.

In the 15th century, Leonardo da Vinci started to come close to a viable idea with his “Ornithopter” sketches that would later form the basis for the modern helicopter.

The Montgolfier brothers were the first to get mankind airborne with their hot air balloon in 1783. Otto Lilienthal, a German engineer, was the design a glider capable of carrying a person for long distances.

In 1903 Orville and Wilbur Wright were the first to create a plane with an engine and a propeller and successfully completed a flight. From this moment, humans were truly airborne for the very first time.

Over the following decades, the design of airplanes became increasingly sophisticated with lightweight metals such as aluminum replacing wood and fabric, and radar, communications equipment, and autopilot systems gradually introduced.

With forecasts predicting the number of air passengers to increase to 7.8 billion by 2036, there’s a need for aviation to grow and develop at a rapid rate. Carbon emissions and the concern over the environmental effect is another reason why the industry is drawing on the latest technology.

Concept flights have proven that electric planes are a possibility but more work is still needed on the density of the batteries. Although current technology isn’t quite where it needs to be to achieve an electric transcontinental flight, the indications are that it’s not far off.

Drones and unmanned aerial vehicles (UAVs) are two new areas which have attracted a lot of interest. However, rather than buzzing around restricted areas and causing alarm, these types of technology have the ability to revolutionize the industry.

One product already in development in Europe can be flown in three different modes: with a pilot on board and in control, remotely by a pilot on the ground or flown remotely but with an additional pilot in the cockpit for vigilance. The ultimate aim is for customers to be able to use these aircraft like a taxi, entering their destination and flying off into the distance – almost like an Uber of the sky.

This may sound farfetched but AI already has the capability to take off, land and cruise the planes without human intervention, so technology is just a short few steps away. Other visions for the future of aviation include blended wings and high-res images of the sky outside being projected onto the walls of the plane. Pilots will still be needed and they’ve not been forgotten; new technology is in development which sits over their eyes to provide enhanced vision and perception of everything from terrain and airspace to traffic and weather.

Carter Industries Inc. have always been at the forefront of innovation, with Nomex flight suits and coveralls supplied to both the military and commercial sector alike. The future of aviation looks exciting and you can be sure that Carter Industries Inc. will be continuing to equip pilots with the products they need.