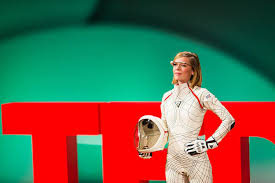 Renowned rocket scientist Dava Newman presented her designs for three space suit prototypes during the 2013 TED Women Conference held in San Francisco this past December. Newman, who is currently an aeronautics professor at MIT, calls her design, “the world’s smallest space craft” and hopes that the suits will be ready for operational use in time for the long awaited voyage to Mars.

During her presentation Newman went into detail about the three suits outlining their many features and the design structure of each. Below is a brief description of each of the three suits.

Suit #1: Newman had Mars in mind when she designed this particular suit. This suit features an adequate amount of “pressurized atmosphere”—one of the main things needed to be able to remain in an environment like Mars. This suit also has a unique feature of which Newman refers to as “muscle wires”. Muscle wires are an active material made from nickel titanium that improve the overall flexibility of the suit, making it easier for users to move around comfortably.

Suit #2: Although it is not meant to be worn outside of the space ship, this type of suit, referred to as an exercise suit by Newman and her team, is definitely one-of-a-kind. The harsh structure of a traditional space suit has often resulted in the loss of muscle mass and strength in astronauts. This often occurs because of the limitations that astronauts are forced to withstand due to the area confinements within space ships. This suit is specially designed to work the muscles of its users simply by wearing it and ultimately helps to ensure that wearers maintain their muscle strength during long voyages.

Suit #3: The third suit which is also not meant to be used outside of the space ship environment, is vastly different from the other two suits because it is meant to be worn inside of a traditional bulky space suit. This suit acts as a protective lining and contains a superior padding system that helps to diminish any soreness or physical issues that wearing the traditional bulky suit alone my cause. Newman’s goal in designing this suit was to find a solution to the severe should problems that many astronauts developed after being in a traditional suit for long periods of time.

All three of Newman’s designs are being described as some of the best updates in the space suit industry. Newman hopes that these suits will be proven to be beneficial to the astronauts and their journey to Mars should one ever occur. Furthermore Newman plans to spend the next few years developing even more space suit designs in the hopes of one day accomplishing her lifelong dream of creating, “the world’s coolest space suits for Mars.”

3 Most Common Types of Protective Suits
Scroll to top