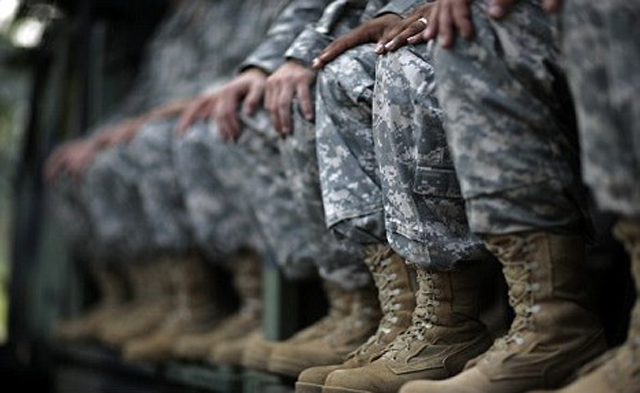 There are military standards around the world when it comes to grooming. Wearing the same uniform and adhering to the same basic grooming standards, regardless of what military service you are in and what country you defend, promotes unity within a battalion. This principal applies to men and women who are new to the service as well as seasoned soldiers.

When a recruit first arrives to boot camp, paperwork is completed, a routine medical exam is given, and if the recruit is a male, his hair is cut using the zero blade on the trimmer. This is the lowest setting on the trimmer, and every male recruit receives the same cut. Maintaining short hair while in the military speaks unity and gives a neat, clean appearance. Hair is to be cut at or above the eyebrows as well. There are also safety reasons why men must have short hair in the military. If a man has long hair, he is more likely to get it caught in the weapons, headgear, and other helmets, and if he were to encounter with the enemy in hand-to-hand combat, the long hair could not be used as a weapon against him should the enemy take hold of it. Long hair is also less likely to get caught in the enemy’s wires or trip lines. It is also important to note that short hair among recruits is a means to reduce the possibility of lice infestation in close living quarters.

Unruly hair styles, such as cornrows, dreadlocks, and braids are not allowed. Neither are wigs or hairpieces. The only exception to this is if the hairpiece is to cover a scar on the scalp. The hairpiece must be approved by your superior officer and must conform to the hairstyles per the grooming standards for that branch of the military.

Mustaches are allowed in the armed services but must be kept neat and trimmed just above the upper lip. Excessive and fashionable mustaches, such as the handlebar mustache is not permitted. Beards used to be allowed, but are not permitted any longer.

Within the last few months, there have been exceptions to Sikh’s who serve in the US military. They are not allowed to wear their turbans in accordance with their religion. Sikhism decrees that the human body is perfect and is not to be mutilated or changed in any way. It is for this reason that Sikh’s do not cut their hair; they believe that keeping their hair long and uncut is a sign that shows respect for the perfection of God’s creation, man. However, some might still protest that they are putting themselves and their unit in danger in the event of combat. The US is not forbidding them to practice their religion, only asking that they comply with the grooming regulations to protect themselves as well as other soldiers in their unit.

As with grooming standards for women, upon arrival on the training base, they are allowed to choose a hairstyle that works for them as long as it is in accordance with the grooming standards for the military. If you are a cadet who has long hair, it is to be pulled back and secured in a tight bun or ponytail that is neatly fastened under your cap or headgear. Women can wear wigs and weaves; however, they must be maintained in accordance with the grooming guidelines for the particular branch of service. Of course, women are allowed to wear short hairstyles as well. Women are permitted to wear braids and cornrows as long as it is in keeping with the grooming guidelines and are neatly and snug to your head. When a female recruit is in training, the proper ponytail holder is to be used. Usually, this means only black or brown ponytail holders. All ponytail holders, such as scrunchies or ponytail holders that have a decorative design are not permitted and will be confiscated if found.

Female trainees are allowed to wear makeup and nail polish as long as it is natural and not extreme. No bright colors of any kind are to be applied to the face or the nails. Neutral colors are encouraged, and women are encouraged to bring out their natural features.

As you can see, the US military has several grooming guidelines that are to be followed. For the most part, these guidelines encourage unity and teamwork within a unit because that is what the recruits will encounter when they are fighting the enemy. They must be able to function as one entity, not as individuals. The standards also give a message of professionalism and respect for your country to the world.

Advancing Within the Military
Scroll to top