The Sky is the Limit: Aviation’s Top Paying Careers 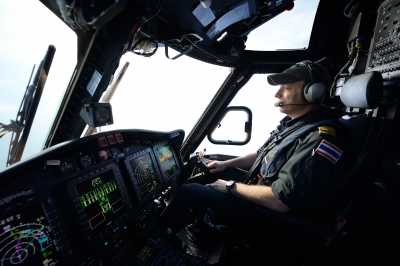 It has been over a century since the groundbreaking passenger flight by the Wright Brothers in 1903. Since then, the art of aviation has become a multi-billion dollar industry. From terrorists’ threats and heightened security, to rising oil and airline tickets prices, the airline has remained one of the economic driving forces with no indication of slowing down. As long as people are still in need of travel, the airline industry will continue to thrive.

This growing industry not only supports the economy, but our communities as well. With the rise in travel demands comes a rise in employment opportunities. But which positions are the most beneficial, and how much do these positions make on an annual basis? Below is our list of the top 5 careers within the aviation industry, and details regarding employment requirements.

1. Director of Aerospace Program Management (~$151,000 annually): It is most likely that this candidate will possess a graduate level degree in business, in addition to an engineering degree. Directors are involved first-hand in the company’s business practices, such as developing corporate strategies, negotiating building contracts, and assuming responsibility for the company’s earnings reports – whether they are good or bad.

2. Airline Pilot, Copilot, or Flight Engineer (~$117,000 annually): While most pilots are militarily trained, there are also college degree programs and outside training programs available from FAA-certified flight training schools. Piloting is not a profession limited to commercial flights; according to the Bureau of Labor Statistics, 34% of commercial pilots additionally dust crops, test new planes, monitor traffic, fight fires, and other ‘non-typical functions and ‘odd-jobs’ that call for their specific flight experience.

3. Aerospace Project Engineer (~$82,000 annually): Ideally, the engineer in this position would understand the ‘ins and outs’ of aerospace engineering, but would also have the drive and organization to act as a team leader, directing projects and delegating responsibilities amongst the rest of the team. They will also become involved in managing project budgets, hiring and training their staff, ensuring their team’s work, and other essential administrative tasks.

4. Aircraft Maintenance Manager (~$74,200 annually): This demanding position calls for both technical skills and team leadership. The manager is knowledgeable, ensuring that their teams perform regular maintenance by the book. Along with scheduling and management, the individual will also hire and train the team members themselves.

5. Air Traffic Controller (~$62,500 annually): Renowned for being one of the top paying positions in the aviation industry that can be obtained with only an associate’s degree, this stress-filled, demanding career has its benefits. The work is distributed amongst more than one controller; there are controllers for: ground movement, takeoff, in route flight time, landing, etc. These positions are highly competitive, although there is slowly becoming an increase of vacancies in controller positions which are available to be filled by those who qualify.

It is evident that aviation is one of the top paying industries in the world today. Although entry level positions offer less than degree-seeking positions, there is one thing that is certain: no matter where you start in aviation, there is plenty of room for growth in order to achieve professional fulfillment and financial success.

The Evolution of Military Aviation
Scroll to top