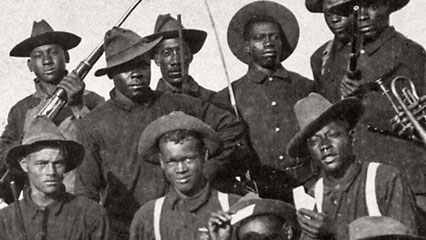 Most people know who George Washington Carver is when they hear his name, but unfortunately, many history books do not mention the African American soldiers who fearlessly fought in the Civil War. As a matter of fact, about 200,000 African American soldiers served the US to rid the plague of slavery within its borders. However, there is little known about them and the great impact they had in the US Army.

It wasn’t until 1866 that the US Congress passed the Army Reorganization Act and added thirty regiments, including six army regiments, called the US Colored Troops. According to http://BuffaloSoldiersAMWest.org, the six regiments “were identified as the 9th and 10th Calvary and the 38th, 39th, 40th, and 41st Infantry Regiments. The four infantry regiments were reorganized in 1868 as the 24th and 25th infantry.”

The Native Americans gave Buffalo Soldiers this term at the time. There were two main tasks for the soldiers. The first duty was to guard, protect, and defend wagon trains, while the other task was to carve out and build roads for the pioneers traveling west.

As you know from American history, the pioneers tragically encountered the Native Americans on their pilgrimage to the west. To the Native Americans, the African American soldiers reminded them of the buffalo, which they hold in high regard in their culture. In the event that a battle should erupt, the African American troops did not shy away from it, but rather faced the dangers and fought gallantly.  By nature, the buffalo have a tenacious nature and fight fiercely as did the servicemen, hence the nickname, Buffalo Soldiers.

Believe it or not, the Buffalo Soldiers were treated very fairly by the US Army and US State Department. Not only did they received the same pay as white troops, but they also received the same quality supplies, which included fine horses. Obtaining quality horses was important since these were Calvary and Infantry Regiments who relied on horses for their transportation, as well as fighting the enemy. However, many horses died in confrontations, and the Army could only afford about $100 per horse. Other supplies that the Buffalo Soldiers received that were of the same quality as their white counterparts were guns, ammunition, as well as food, and medical care. That’s not to say though that these courageous men didn’t encounter racial prejudice because they did. It is unfortunate that some US Generals refused to serve alongside these brave men based on their skin color.

African American soldiers earned and received nineteen Medals of Honor during the Civil War alone.  A couple of the battles that they fought in were at the Battles of Honey Springs, and the Battle of Cabin Creek. From the time of their inception in 1866, these renowned Army troops were comprised of only African American men and defended civilians and the United States of America until 1951.

Many Buffalo Soldiers reenlisted in the US Army after the Civil War. They reenlisted for a couple of reasons: even though slavery was abolished, they did not have a home in which to return, because the men didn’t want to go back to the plantations where they were enslaved. These African Americans were treated more fairly while they served in the Army than if they were civilians, so it made sense for them to stay and many made a military career of it. These soldiers also knew that prejudice was still prevalent and many did not want to subject themselves to that kind of horrible treatment.

The Buffalo Soldiers were a driven and bold group of men who fought for equality and basic human dignity. They are among the first who bravely stood up for the cause of civil rights.

Women of the Air Force, Past, and Present
Scroll to top