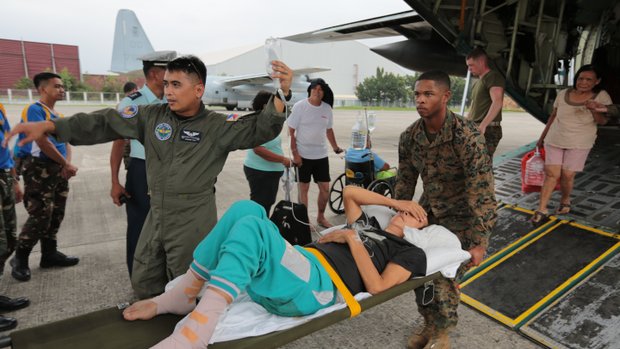 For centuries America has been known as the “home of the free, and the land of the brave”; and it is a number our brave men and women who are currently leading the relief efforts in several recently devastated parts of the Philippines after Typhoon Haiyan plowed through much of the region nearly a week ago.

The “super Typhoon”, as many are referring to it as, brought an unimaginable amount of destruction to the area, resulting in over 3,600 confirmed deaths. While the number of fatalities continues to rise each day, the reality of the devastation caused by the Typhoon is becoming overwhelming for most. In addition to the high death toll, the disaster also left over 12, 000 people injured, nearly 600, 000 homeless, and several thousands of individuals still unaccounted for.

Our U.S. Marines and Navy personnel are helping aid members of the community that were affected by the typhoon by supplying food, water, personal items, and helping build temporary shelters. Food and medical assistance are high in demand, however volunteers, officials, and medical staff are working hard to meet the needs of each individual. A large amount of the U.S. military are also assisting in the search for all those who are still missing, which is a reported 1,179 people.

Filipino government officials expressed their gratitude for the U.S.’s timely response to the worst natural disaster, ever recorded in the history of the Philippines. “Having the U.S. military here is a game-changer. For countries that we don’t have these kinds of relationships with, it can take a while to get help. But with the U.S., it’s immediate,” said a representative for the Filipino military. Indeed this is what our country is all about; selflessly assisting others during dire times of need, uplifting the distraught citizens of surrounding countries, and lending a helping hand whenever possible. In addition to constant military presence, we as a nation have contributed over $22 million to go towards relief efforts.

Our dedicated men and women never hesitate to offer their assistance whenever and wherever needed. As they stand tall in their combat coveralls and Nomex flight suits, which we of course manufacture, their humble service to the Filipino civilians is much appreciated, not only by the government of the Philippines but by their friends, family, and an entire nation back home.

The generosity that our great nation has shown towards the Philippines during this tragic time will be forever remembered. I’m sure I can speak for our entire nation when I say that we are proud of our military troops, and we stand behind them as the lead relief efforts in the Philippines. To unite during tragedy is perhaps the greatest display of support. As the famous saying goes, “We are only as strong as we are united, as weak as we are divided”.