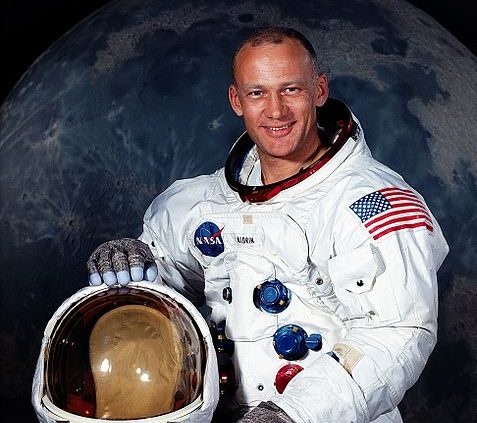 Edwin Eugene Aldrin Jr., or more universally recognizable, Buzz Aldrin, is a prime example of someone who has achieved in multiple areas to become a monumental figure in the history of mankind. From his early days as a fighter pilot to his development into one of the most celebrated and recognized astronauts ever to his new-found talents as an author – he is a remarkable man we can be proud to call American.

Buzz Aldrin somewhat went against his father’s wishes to use his engineering degree and instead chose to become a fighter pilot for the US Air Force. His time with the services enabled him to fight in the Korean War. His talents as a fighter pilot did not go unnoticed with his peers and superiors. He was awarded the Distinguished Flying Cross Award before returning to university to earn a Ph.D. in astronautics at MIT.

Following his graduation, he was quickly ushered to NASA’s space programme where he became the first Ph.D. holder to obtain a place in NASA. One of his earliest achievement while working for NASA was developing training techniques for astronauts walking with less gravity. He used underwater training to simulate spacewalking. At the time, he did not realize that he was preparing himself to walk on the moon a few years later.

This was to be just one of a series of firsts for the NASA genius. He completed the longest spacewalk at the time at a staggering five hours. He is also responsible for taking the first space “selfie” after he photographed himself after part of his equipment failed.

Later, he accomplished what most people know Buzz Aldrin for. He was the second person to walk on the moon. This was a televised event that drew in the largest audience in history at that moment. Following this event, Buzz Aldrin and his colleagues became heavily decorated and he even had an asteroid named after him.

After his time with NASA, Buzz Aldrin went on to exhibit his talents in other areas. He became an author of science-fiction novels, wrote memoirs about his one-of-a-kind experiences and even wrote children’s books. These are must-reads for any Buzz Aldrin fan or general space enthusiast.

A Big Thank You To Our US Forces!

We want to take the time to wish all of our servicemen and servicewomen a wonderful holiday season. We are thankful for the risks you take to keep our country safe. We hope you enjoy the time you get to spend with your families and wish you all the best for the year ahead!

As you serve us so well, we continue to strive and serve you as best we can. We endeavor to continue providing US military personnel with exceptional suits and overalls that keep you unseen and protected at all times.