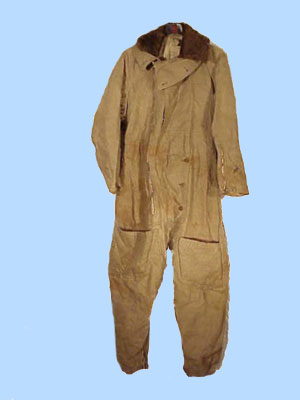 The modern flight suit is light weight, designed to be keep the pilot warm during flight and provide the pilot with the most optimal protection in case something should go wrong while in flight.  As you can imagine this wasn’t always the case, the quality flight suits like everything else improved over time as new materials were developed and new applications for them discovered.

Before and at the beginning of World War I most aviators wore leather coats while flying they were manufactured in brown and black and in many different styles.  There were very few common features however they were mainly leather due to it’s durability.  During this time some pilots wore a garment made from gabardine which is a tightly woven fabric made from worsted wool or cotten.

The Royal Naval Air Service, in 1915 introduced an overcoat with a belt, in blue, that was worn as a flying kit. It looked like a knee-length, double-breasted reefer coat. it had very large flap and button skirt pockets, a falling collar and shoulder straps.

The Royal Flying Corps’ first official body garment was introduced in 1912.  It was a long jacket with a cross- over chest piece  It had two flapped pockets which covered the front of the garment and an angled pocket use to store maps on the chest. It fastened with buttons down the right side and had a stand collar fastened with two small buttons and it had a woolen lining.  An improved version with a large, unflapped map pocket and ‘grip studs’ on the skirt pocket flaps was introduced in September 1913, accompanied by leather trousers with a front flap opening, buttoning to a waistband, and with buckled straps round the ankles.

These garments were the only official clothing until August 1916 when a waterproof garment was introduced.  It’s thought that this garment was made of standard rain coat material but lined with slink, which was wool taken from a lamb.

In the winter of 1916 an Australian flight Sub-Lieutenant Sidney Cotton of RNAS discovered that the grease in his maintenance overall protected him from the cold air.  While all of his peers where coming back half frozen from missions he was fine.  He took this idea  and designed a new suit with the assistance of J. Evans of Robinson and Cleaver Limited.  The suit was made of a light Burburry material it had a lining of thin fur and air-proof silk.  It had fur cuffs and neck as well.  The Sidcot became the main flight suit of the final years of the war.

When World War II began electric heated flight suits were being used for crews flying at high altitudes.  it was so cold at altitudes of

30,000 feet that their skin would freeze.  But as pressurized cabins were introduced the need for heated warm bulky suits became obselete snd the emphasis began to turn to safety and a suit that was more functional in the small confines of the fighter plane cockpit.   AN-S-31 flight suit was developed for the US Army Air Corps.  It had two button-down breast pockets and two button-down shin pockets that were designed to be accessible from a seated position.  It was made from either wool or tight-weave cotton which provided some protection against wind resistance and fire.

Back in 1964 in Indianapolis, there were many notable race car drivers that had died due to several unfortunate fiery crashes. People were angry about this and demanded that someone come up with something that would be able to save the lives of their favorite race car drivers. Within 2 years, there were race car drivers wearing a special suit. It was later discovered that the suits these drivers were wearing were suits made from the Nomex material.  Nomex is a flame-resistant material that was made using a Meta variant aramids. This was invented by Du Point. Even though the Nomex suit was released in 1966 it did not grow in popularity until 1967, this is due to the fact that there had not been any marketing done during the early stages. Once the marketing of this new material hit the racing community’s people became more aware of the materials properties and benefits for the race car drivers. They learned that the Nomex material was not only flame-resistant but highly durable as well as rigid. Since the flight suits are not made from the para-aramid material it does not protect the wearer from bullets. It is instead made from a meta-aramid material which is the property that protects the wearer from fire.